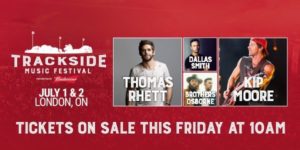 The Trackside Music Festival will return for a second year this summer at the Western Fair.

Rhett is best known for his six number one hits including ‘Die a Happy Man’ and ‘Crash and Burn.’ Smith recently released his third solo album, ‘Side Effects.’

Organizers say further announcements will following over the coming weeks as supporting acts for both days still need to be added.

The Sidetrack Stage will be back again and will once again feature homegrown country music acts.

The festival will be held July 1st and 2nd at the Western Fair.