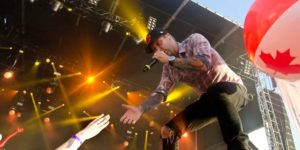 The crowds at Western Fair District rang in Canada’s 150th birthday in a big way, rocking out to some of the biggest names in country music on the first day of Trackside Musical Festival, July 1.

A sea of red and white welcomed performers from London’s own Genevieve Fisher to superstar Thomas Rhett up on the main stage, while grassroots talent kept the party going on the sidetrack.

With beer cans hoisted in the air, fans couldn’t get enough of Dallas Smith, who pumped out hit after hit — including some of his biggest, Lifted, Cheap Seats, and crowd-favourite Wasting My Time, hearkening back to his former life as frontman of the rock band Default.