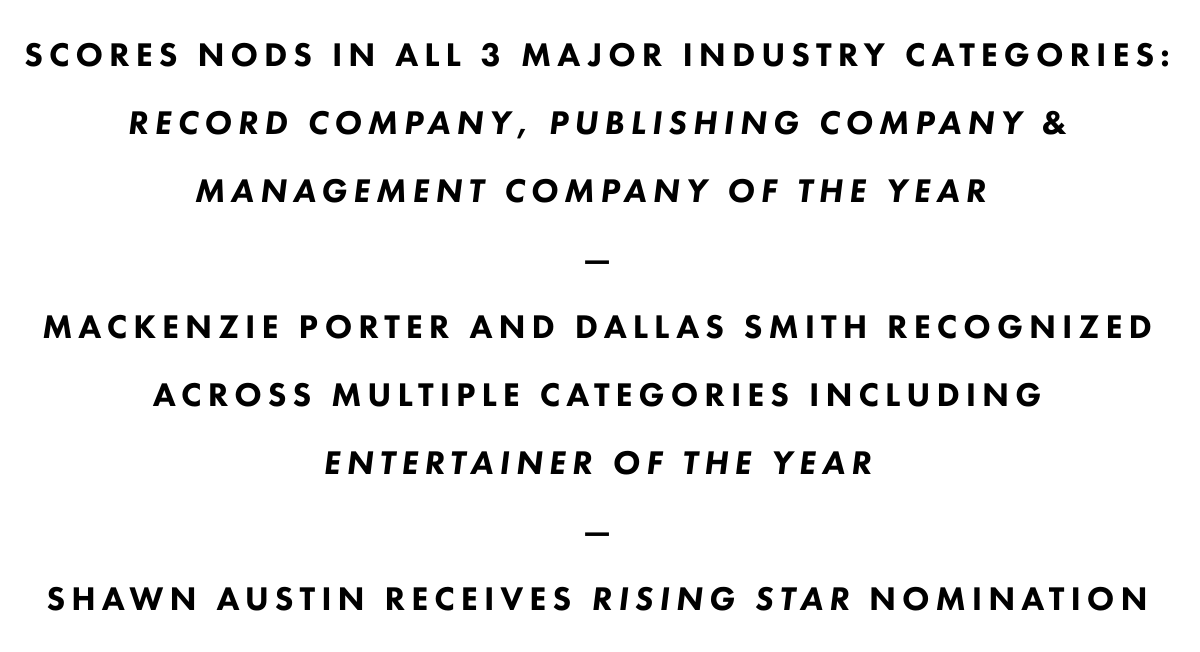 TORONTO, ON (September 23, 2021) — With offices in Nashville and Toronto, Big Loud has quickly become one of the most successful independent labels in North America. Yesterday, the company’s success continued with the announcement of the 2021 CCMA Award nominations. Celebrating a total of 15 nominations across artist and industry categories, Big Loud was the only industry nominee recognized across all three business categories — Record Company of the Year, Publishing Company of the Year and Management Company of the Year — as their artists became some of the most celebrated.

Reigning Entertainer of the Year and recently announced label signing Dallas Smith earned 5 2021 CCMA Award nominations: Single of the Year (“Like A Man”), Fans’ Choice, Album of the Year, Male Artist of the Year and Entertainer of the Year. With multiple JUNO and CCMA Award wins, eleven No. 1 singles at Canadian Country Radio (the most #1 songs by a Canadian Country artist in the Nielsen BDS era, surpassing Shania Twain), numerous high-profile appearances and sold-out national headlining tours Smith has dominated the country music scene in Canada since his debut in 2012.

Earning four #1s (3x Canada, 1x Australia) in less than 18 months, Big Loud’s MacKenzie Porter has become Canada’s fastest rising star. Taking home 4 2021 CCMA Award nominations — Female Artist of the Year, Video of the Year (“Drinkin’ Songs”), Fans’ Choice and the coveted Entertainer of the Year — Porter has had much to celebrate this year. Not only did she earn a 2021 JUNO Award nomination (Country Album of the Year) and a 2021 SOCAN Country Music Award (“These Days”), she was also the #1 most played Canadian country artist in 2020 and the first country female to secure a Top 10 crossover hit since Shania Twain (2003) with the pop remix of her chart-topping hit “These Days.”

Since announcing his signing to Big Loud / Dallas Smith joint venture Local Hay a few short weeks ago, Shawn Austin has had much to celebrate. Yesterday the celebrations continued as the Vancouverite earned his first 2021 CCMA Award nomination in the Rising Star category. Strongly demonstrating he deserves to be included in this year’s nominations, Austin has made a serious impact with his single “Tailgate to Heaven.” Featuring Big Loud Records’ flagship artist and MULTI-PLATINUM country superstar, Chris Lane, the song was #1 most added (all-formats) upon release and is closing in on the Top 30. 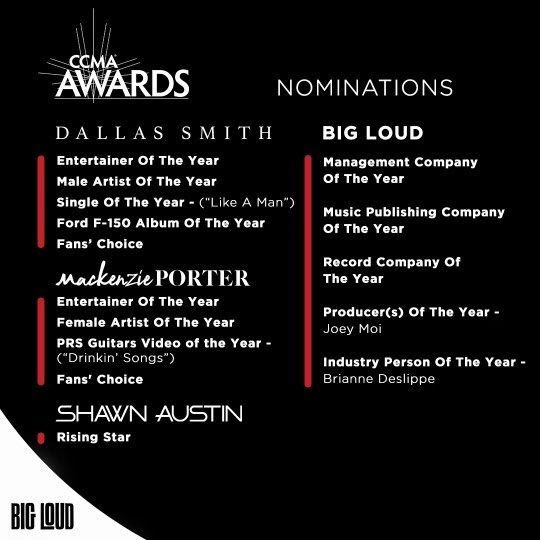